Review of Draco bumpers for iPhone 5.

TomilyLeave a Comment on Review of Draco bumpers for iPhone 5.Posted in review 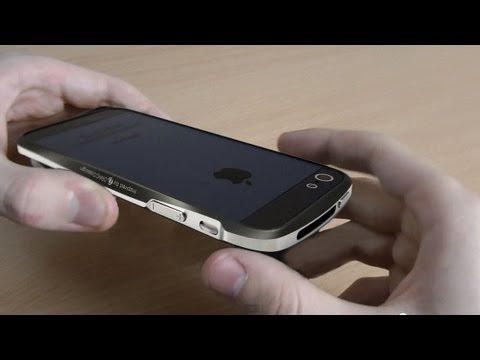 For the first time, the world started talking about bumpers in the summer of 2010, when the iPhone 4 was released. In the first month it was not clear what to call this new accessory, so at first we wrote “Bumber case”, but then the line between covers and bumpers became clear: the bumper is protection, which is worn around the perimeter of the phone only on its edge to protect the metal case from scuffs and paint chips.

The advantage of bumpers is that they do not increase the thickness of the iPhone, but the disadvantage lies in the unprotected back cover of the gadget. However, manufacturers quickly found a way out and began to complete the bumpers with self-adhesive pads. So why are bumpers now taking over an army of fans from covers? The answer lies almost on the surface: bumpers have more ability to customize the appearance of the phone. The bumper forms a single whole with the phone, turning it into a “different” gadget.

And top-end products like Elementcase or Lunatik even have to be assembled by hand, which makes it even closer to a smartphone. Today we will introduce the world’s first curved aluminum bumpers. We meet Draco.

Draco was designed by the Japanese bureau Deff. In my opinion, no one has yet invented more elegant bumpers in the world. On the sides, the iPhone is tightly pressed with aluminum, and on the back it is protected by a leather branded sticker.

To prevent the phone from rubbing against metal, there are soft seals on the inner corners. jigsaw

I can swear that the Japanese conducted anatomical studies of the hands, because the bumper fits perfectly in the palm of your hand, while the fingers are as relaxed as possible.

Even the closest competitor, Elementcase, has a weaker grip. Although this comparison is not entirely tactful, because the Elementcase is made of polymer, while Draco is made of aircraft-grade aluminum. The latter is very important, because the aircraft does not interfere with electromagnetic radiation, and therefore does not affect the signal of the cell tower in any way.

Draco bumpers are resistant to chipping and abrasion. They are painted using electrostatic spraying, which is more expensive than anodizing, as we know from the black iPhone 5. Therefore, on an iPhone, chips form from any careless contact with hard surfaces, and Draco’s surface can only be scratched with a jigsaw.

The hardest part about assembling Draco is attaching the nozzle to the quiet mode switch. It doesn’t work the first time. The manufacturer offers a whole constellation of colors and shapes. One series of bumpers is connected with two screws, the other with four. Some have a bezel, others are made from a single piece of aviel.

Here you can find any option for every taste.

Draco belongs to the above average cost accessories, the appearance of which is very fond of copying the Chinese, therefore each bumper is provided with a serial number – by which you can check the authenticity on the company’s website. Moreover, the protection allows you to enter the serial only once, after which it is blocked.

👀 Read also. Everything on the topic.

I freaked out and switched from iPhone to Google Pixel. Honestly, I don’t regret it yet.

Finally, we listened to headphones from the legendary JVC! Here are 4 models from the Japanese, there are even pink ones.